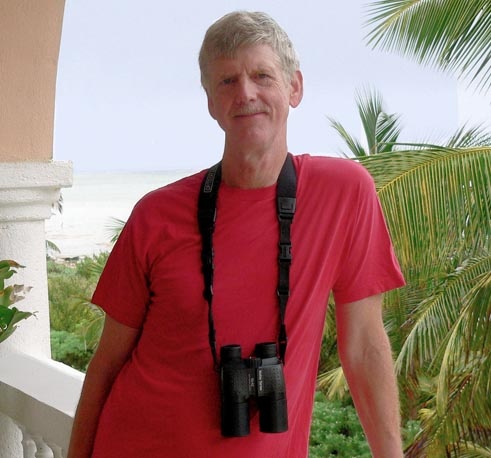 John Henry was born in Berkeley, California, and has lived most of his life in Northern California.  For many years he operated a traditional darkroom in his basement, printing black and white enlargements.  Later, when he began to travel widely, he took countless film images, slides and digital photographs in all parts of the world.  Prints are prepared with archival pigment ink on thick rag paper.

Images are usually preemnted in a straightforward manner, with a minimum of software alteration.  Images have a story to tell, sometimes obvious but usually more subtle or even subliminal.

In the last several years John has been experimenting with abstract imagry, sometimes making use of his own water-media paintings as a subject for digital photography.

I live on the San Francisco Bay.  Each day I experience the sun and fog on this incredible body of water.

My journey as an artist/photographer began decades ago in a film darkroom I built in a corner of my garage, shared with my daughter.   Later, when I began to travel widely, I took thousands of film and slide images around the US, in Latin America and Europe.  I can see now that these could be accurately described as snapshots.

It was when I took the leap to digital photography that my creative juices began to flow, and I began experimenting with extreme close up photos of botanical subjects.   Most of my images were presented in a straightforward manner, with little obvious digital alteration, but sometimes a fanciful theme would appear.

More recently, I have been trying to find my own style with imagery, creating abstract water-media paintings which I photograph and alter digitally in countless ways.  To me, photography is like singing, and I am just now beginning to find my own voice.  I may have labored over an image for months, or longer, but if it is successful, it will appear to have flowed out effortlessly, like a casual song.

I am an active member of the Marin Society of Artists, the Oakland Art Association, and the Berkeley Camera Club.  I have participated in frequent competitions and workshops with these organizations, have won numerous awards, and have been invited to show in many juried exhibitions.